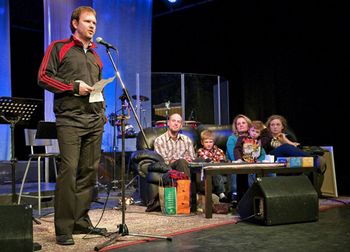 Back in December, Grace Community Church held a going-away tribute for my family. Bartley Sawatsky, Grace's lead pastor and my great pal and ministry partner of the last dozen years, blessed us with a singing performance of a song he'd written. Unfortunately, I do not have a video of the moment, but I do have a copy of the lyrics.  Here they are:

First name Bart. Last name Blair
A boatload of heart. A thimble full of hair
Came to Ontario, had the world on its knees
Traded it all for a microphone and nineteen G's

Bart, he could play, and Bart, he could sing
Tell you the truth, he could do most everything
Bartley had to smile, his choice looked so shrewd
A perfect cover for his own ineptitude

Bart made some friends, like the Wheelers and the Stanleys
He knew he was loved, but felt none the more manly
He started chasing girls in the manliest way-
A 10-day free trial on the Christian Cafe

Met a gal named Lisa and Bart was on the take
She sang like and angel, bit better still - she could bake!
They hardly hear the wedding bells before the ultrasound
Lisa, she was pregnant, but Bart gained 25 pounds!

Bart and Lisa loved their daughter...sweet Sarah-lynn
But Bart's dream of a baseball start wasn't happenin'
Had a son named Silas, and then E-pha-rum
Gotta come form Texas to think of names that dumb :)

But Bart's brains were fine, in fact, way above par-
When he came to Grace, couldn't even play the guitar
He learned it fast and soon amassed some fans that were keen
But the love went up in smoke with the fog machine

Bart's karma at mens' retreats, well it wasn't so good
Started back when he lost all of the men in the woods
But the men of Grace take the goods with the bads
Took advantage of a paintball game to shoot Bart in the [nads]

So soon Bart decides that he wants to lose some weight
Forever Fit is the answer, and soon he's feeling great
Could have been the poster child, applauded and cheered
But by the time of the photo shoot, he had done disappeared

Just a popsicle stick with a beard...

Man I sure miss you guys!

That was so funny Bart! I must have missed it. Thank you for sharing! :)

I laughed and I cried when I heard that song;
Sure wished someone put their camcorder on!!
That Bartley, you know, he's a witty guy;
Famous for his tear flingin' sermon cry.

The comments to this entry are closed.

Currently on the nightstand...